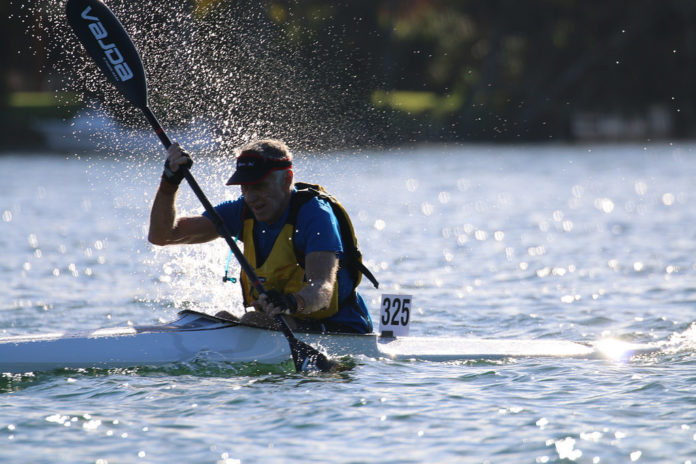 This race was a new event for the Vajda Northern Marathon Series. Bonville Creek Club did not want to host a race and Pacifica Club, the other Coffs Harbour paddle club, had secured a race in the NSW Marathon Series. This provided an opportunity for a cross over event between the “Southern” marathon series and the “Northern” marathon series, a little bit like what used to happen with our Forster race.

One of the issues that soon surfaced was the different way in which the two marathon series were organised. The Southern series uses a division format in which paddlers enter each race in divisions, 1 through to 12, according to their previous performances. A good performance in a few races will see you promoted into a higher division, some poor performances will see you relegated. It’s a bit like the English football league. The difficulty for Northern paddlers was knowing in which division to nominate as we are “newbie’s” in this system. Another difficulty was how to transfer the points gained to our point score format, based on age and boat class. Thanks to the help of Bob Turner from PaddleNSW an entry system was devised that would enable our point score coordinator, Gerard Effeney,  to separate the Northern Marathon Series paddlers from the rest even though we all took part in the same starts.

Another issue was the compulsory wearing of life jackets while racing as there has been a change in NSW government regulations affecting kayaks and canoes. Mike Mills-Tom, from Pacifica Canoe Club, had applied for an exemption to wearing life jackets but this was not granted. However with the mild temperature and wind factor it was no problem wearing a lifejacket

There were 129 boats (including doubles) with 36 boats nominating as Northern Marathon Series entrants. The organisation for this race was very good, in terms of the on-line entry system, the starting procedure and result reporting system. The venue for this race was very beautiful. It was the Bellinger River at Mylestom. A strong wind was blowing just prior to the start but thankfully it dropped when racing began. There were 11 starts so overcrowding was not too much of a problem in each start.

After the race there was presentation ceremony and medals awarded for each division of the race that day. Some Northern paddlers were in the medals. These were:

Results for the whole race are available at http://paddlensw.org.au/marathon-results . (Please choose the race date of June 3).  Generally Northern Paddlers are not given official places and are listed as “RNK”, meaning this was regarding as a ranking race.