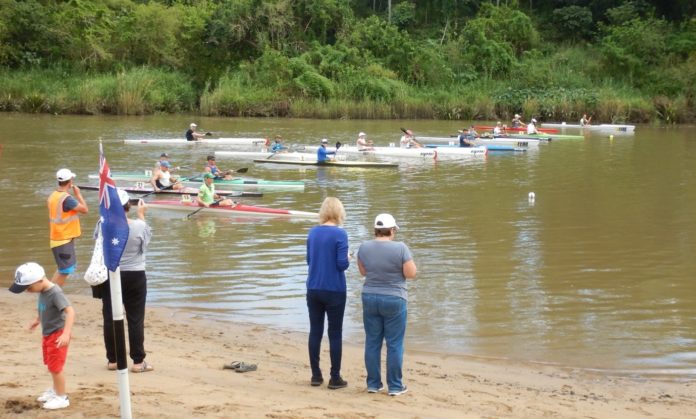 Not run since 2004, the “Logan River Marathon 2018” was held on Sunday 22nd April.  It was named the Logan Classic in prior years, and if we run it again, we would like to call up the old name again.

The tide was running out strongly at race start.  To avoid mayhem among the pylons of the Larry Storey Bridge, the race had to be started in a downstream direction – a difficult but necessary decision.

The QC Marathon Technical Committee guys did a superb job, with Peter Winton marshalling the paddlers just upstream of the bridge into their start groupings.  Chris Hurley then ushered the paddlers carefully down current, and handed them over to starter Ian Frost.

Away they went with a whistle and a shout – in wave after wave, with barely a minute between each group.  The start of the 116 paddler field had to ensure that all had left the congestion of the start area before the ‘guns’ arrived back to continue onto the upstream part of the 5 km loop course.

One paddler met with grief in the maelstrom of the start wash.  Race over?  No way, a quick swim to the sandy beach, back in, and away he went again.  Marathoners never give up!

In no time at all two of the paddlers were coming back upstream past the start at the 3.4 km mark.  World Ocean Ski champion 40-44 years Tim Fitzsimmons in a long Fenn Elite S ocean ski piled on the pressure and led QC Sprints Technical Committee Chair Matt Ingerman, who was in a bright green Viper K1.  The Viper of course has little wetted surface area to induce drag, so Matt was sitting pretty on Tim’s wash into the tide at that stage.  By the time they came back through the start/finish line to complete the first of three 5 km loops, Matt had taken over the lead sitting comfortably down current, while Tim could lessen the impact of his long wetted area.

Without any waves, this was home territory for Matt in the flatwater K1, but that was never going to deter rising star Tim, as he reckons racing is “fun”.

The other paddlers filed past in little packs, some going downstream on the second loop, and the backmarkers still fighting their way up current.

At the head of the race, the “Battle of Hull Shapes” was on in earnest.  Tim animated the race with some strong pace back past the crowd of onlookers, while Matt sat there again on the side wash.  Back to start the third loop, and Matt again took over the lead.

They appeared to be such sporting gentlemen, each working for the other and doing their turns on the front.  Ha ha, do you believe that?!  From a high vantage point just downstream of the start, there seemed to be some squeezing and “drifting” off line, or were my untrained eyes deceiving me?  I don’t think so.  After all these guys are experienced and top competitors.  No quarter is given and none asked for.

Back up current past the start line for the last turn around the top of the course, and Tim was piling on more and more pressure.  Back through the bridge pylons, and thankfully a momentary truce must have been called, as they raced for the line.

As they approached the finishing sprint, Tim took the inside line around the sandy point, and hit bottom with his rudder.  The race was effectively over as Matt cruised through the finish line, with Tim coasting home still only 6 seconds behind.

Round 1 of the battle of hull shapes goes to the flatwater K1, but this Pacific Coast Paddle Series has only just finished the second of 9 races.  Hopefully this intriguing battle will continue.  And if Tim finds a bit of breeze and wave chop… look out!

There were many other good performances, and the full race results for the 116 paddlers are available at https://www.webscorer.com/race?raceid=133615

A short movie focussing on the race helpers and the battle of the hull shapes is at https://youtu.be/rjGi_AxnmO0

Photos and information on the forthcoming races are available at https://www.facebook.com/PacificCoastPaddleSeries/

We learnt a few lessons about how to better run this race, but it could not have been as successful as it was without the technical support and encouragement of the Varsity Lakes crew of Chris Hurley, Brenda Hurley, Ian Frost, Julie Frost, Peter Winton, and the Greater Logan crew of Peter Hancock, Mark Sanderson, Trish Sanderson, John Donkersloot, Maurie Hutchison, Tonia Hutchison, Matt Short, Graeme Will, Lynne Will, Hugh Hoyte, Anthony Benn, Sue Beith, and Jo Stephens.

Thank you to all the paddlers and their support crews for their patience, good humour, and for making our jobs easy.

See you all at the next race the Lismore Race on Sunday 6 May. On-line race entries are now open at https://bit.ly/2vvBSP1.