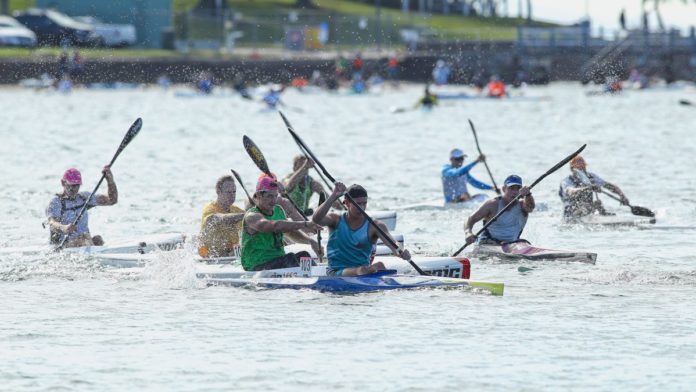 This year the Wetlands Wander was held a week later than usual, and some of us were a bit anxious that the weather, wind and tide gods wouldn’t smile on us. As it turned out we
had nothing to worry about! While the wind did pick up a little at the start, and made the paddock a little bumpy to cross, it didn’t really impact on the how the race unfolded.

This year, aside from the date there were other changes too.Our race was part of what has proved to be the very successful divisional racing that has made up the new Pacific Coast Paddle Series (PCPS). Our Wetlands Wander was race four, and as a club we were leading the point score, so there was a lot at stake. Fortunately the PCPS team – led by Chris Hurley, Peter Winton, Brook Cross, Ian and Julie Frost – showed us the way with the new online registration system, proficiently marshalled the rabble of boats across all divisions (even when it was a bit bumpy) and getting everyone off to a good start.

As usual, I think our race was the ‘best ever’, and this was confirmed by Facebook(FB) messages I received after the event. Although I have to say the preceding three in the series were wonderfully organised, well attended, and a pleasure to be part of. I guess I’m just a bit biased when it comes to Sandgate!

Wetlands Wander day is always great here – it’s when we really get together as a club. It was fantastic to have the support of volunteers from our sea kayakers, creekies and the wonderful Juniors’ Cake stall. Our Juniors didn’t just do it with the cakes. My neighbour Amelie Geary took out the 3km race and Rosina McAntee was the winner of 6km event. Well done to both of you!

We had some other winners too across the longer divisions: Mark Mustchin winning his category and Jenny Theiss taking the Kimberly Cup for the fastest masters women’s time in the middle distance races.

So the assessment of the day overall was that it was warm and sunny even though it was officially the first week of winter. SCC was well supported by local sponsors, including our Federal (Annika Wells representing Wayne Swann), and Local (Jared Cassidy Cr) government members. But best of all by the racing community who continue to front up and enjoy our race. I’m already looking forward to next year.

Next race will be at Tweed Tumbulgum on Sunday 15 July 2018.